Bill Hunt is licensed to practice law in all state courts in Montana as well as the Blackfeet Tribal Court in Browning, the Chippewa Cree Tribal Court in Rocky Boy, the Confederated Salish Kootenai Tribal Court in Pablo, and the U.S. Courts Martial. He earned his law degree from the University of Montana in 1998, clerked for the 9th Judicial District Court in Shelby, and founded his private practice in 2000.

Bill has experience in many areas of the law including representing the interests of Canadian clients in Montana, municipal and county government, mediation, USDA Rural Development, and areas such as real estate, business, estates, and uncontested family law. He is currently the attorney for the City of Shelby, Montana, Town of Chester, Montana, Sunburst, Montana, and Tri-City Interlocal (Conrad, Cut Bank, and Shelby). He has extensive trial experience and certified as a mediator through the Montana Center for Collaborative Solutions.

Bill's roots are the Hi-Line. He was born in Chester, Montana. His parents moved the family to Helena in 1969. Bill is now raising his own family in Shelby. He is deeply committed to the practice of law having come from a family of attorneys including his father, retired Montana Supreme Court Justice Bill Hunt, Sr.

Besides practicing law, Bill has been a member of the Montana Army National Guard since 1988. He also currently serves on the Montana Aeronautics Board having been appointed by the governor. Bill is a member of other civic groups as well, including the American Legion, Veterans of Foreign Wars, Elks, Masons, Shriners, and Kiwanis. He further served his community as a 10 year volunteer on the Toole County Ambulance crew as an Emergency Medical Technician.

Bill is married and has a daughter. As a native of Montana, Bill enjoys anything outdoors including hunting, fishing, raising tomatoes, and especially downhill skiing. 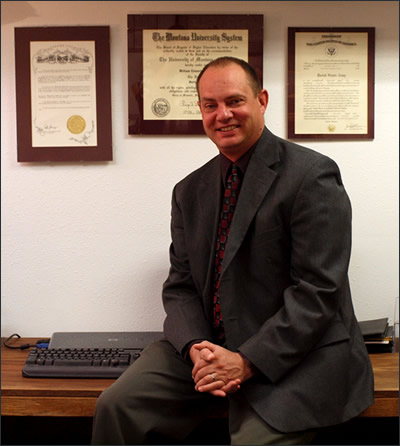